For Our Police… Tanks And Machine Guns And Grenades, Oh My! – PART 1

Well, Americans, today Trump is planning to rescind an Obama era decree from 2015 that restricted civilian police departments from receiving surplus military hardware and software.  I am sure he rescinded this simply because it bears Obama’s name and less about actual statistics to bear out the actual need, but for the sake of argument we will just accept this as it is.  In the event you are confused about this or never even knew this was a valid federal program.. here’s the back story.

Way back in 1990 Congress passed the National Defense Authorization Act which was in some level of response to the war on drugs.  It authorized the Pentagon to provide surplus military grade equipment to civilian police departments.  In 1997 this program was enhanced to the point where your local law enforcement agency could requisition armored vehicles (in some cases actual tanks with cannons), grenade launchers, various military grade weapons, and of course, clothing and personal protective gear, like kevlar helmets, vests, etc.  In actual practice much of this equipment did upgrade certain capabilities of local law enforcement to counter many threats going into the 21st century.  Potential terrorism, gang wars, criminal activity, the drug war still ongoing, and civil disobedience.

As the years have passed many police departments had managed to obtain military equipment that one might call to question as to why it might be needed.  This is most apparent in some small town agencies having those huge MRAP armored vehicles (MRAP… mine-resistant, ambush protected), the name itself making one wonder why a vehicle like that would be needed even in an urban big city environment much less a smaller burg.

Anyway, one of the post-mortums after the riots in Ferguson was the the simple appearance of local police on the scene looking like an military force; calling to mind to many of the rioters an imposing federal government trying to assert freedom-stifling authority.  In other words, a bit of overkill in trying to assert civil authority when that kind of image was not required.  So in response, Obama decreed any more widespread distribution of military surplus equipment to police departments would be curtailed.

Now.. my own opinion was reflected in December, 2014 post on my old blog.  Now.. common sense suggests that Obama’s 2015 decree was likely more political; to look good like he was doing something in response to the Ferguson violence.

President Barack Obama issued an executive order in 2015 prohibiting the transfer of a host of equipment, including armored vehicles, grenade launchers, high-caliber weapons and camouflage uniforms following controversy over the “militarization” of the police response to unrest in Ferguson, Missouri.
“We’ve seen how militarized gear can sometimes give people a feeling like there’s an occupying force as opposed to a force that’s part of the community that’s protecting them and serving them,” Obama said at the time. “It can alienate and intimidate local residents and send the wrong message.”

In actual practice the decree said absolutely nothing regarding how local law enforcement was to use any existing equipment or uniforms; did not provide guidelines for their use in crowd control.  So the effect of the Obama decree was quite minimal.  Trump’s reversal of this decree will likely not mean much one way or the other… BUT…. the public reason provided by the administration and AG Sessions.. is just garbage.  Maybe that’s my biggest objection to this back-and-forth decree playing.

“(W)e are fighting a multi-front battle: an increase in violent crime, a rise in vicious gangs, an opioid epidemic, threats from terrorism, combined with a culture in which family and discipline seem to be eroding further and a disturbing disrespect for the rule of law,” Sessions said,…”

Sessions goes on to say…

“The executive order the President will sign today will ensure that you can get the lifesaving gear that you need to do your job and send a strong message that we will not allow criminal activity, violence and lawlessness to become a new normal,” Sessions added.”

Now, of course I am NOT suggesting anything fascist about Sessions or his remarks as being something like “1984”.  I don’t much like him for political reasons but I am sure he’s an honorable American.  But his remarks are just plain stupid as a reason for Trump rescinding the decree.  Anyone with a measure of common sense could have said something better.

“The executive order the President will sign today will open up to local law enforcement agencies and making available to them the lifesaving gear proven successful with our military, along with hardware, vehicles, and weaponry to assist and enhance police effectiveness in serving and protecting our communities; while at the same time not being a burden on municipal budgets.”  ME… I wrote this.  It’s not the only approach for sure, and there’s likely many other ways to say the same thing.  My point is that, it’s far better than what Sessions said.

The recent police shooting events and subsequent demonstrations across the country have let loose a cornucopia of social issues and among them is the idea that maybe the police departments of the country are a tad too “militarized” in the way they not only handle riot control but equip themselves to do so.

As the fingers get pointed around in all directions one point of contention has been the federal government’s program, administered through the Pentagon, of distributing military surplus equipment to local law enforcement, is not as discriminating as it could be in verifying a need for certain equipment by a specific police department making a request, as well as providing adequate training for the use of some of the more specialized military hardware.  Given the images of militarized police units in Ferguson dispersing the crowds looking like something from a neo-fascist Orwellian movie, there’s seems to be a little more at play here than just cops with tanks.

I think it’s all about mindset; trying to focus on the immediate problem in a way that presents an image of authority for public safety rather than oppression of civil rights.  I am not a social scientist nor law enforcement psych researcher, but let’s explore a bit the structure of any sort of public demonstration that has the potential for turning into a crowd control problem for the police from some level of common sense.

Historical Sidebar – Few people know about the origin of the Molotov cocktail.  You may recall that in the beginning of WW2 the Germans and the Soviet Union were buddies on the same side (this changed later when Germany invaded the Soviet Union in 1941).  This was forged in 1939 by the Molotov-Ribbentrop Pact… named after then Soviet foreign minister Molotov and German (Nazi) foreign minister Ribbentrop.  Along with the non-aggression agreement the pact contained a secret arrangement whereby the Soviets would invade Finland for their own ambitions.  When the invasion started Molotov put off any bad press by saying that the alleged cluster bombs the Finns were saying the Russians were dropping on them were actually food and humanitarian supplies to help the Finns.  In response to the invading Russian military the Finns fought back, often using gasoline in glass bottles with a rag stuffed in as a kind of fuse.  They nicknamed these “Molotov cocktails: a drink to go with the food”.  Molotov despised the reference but had to live with it through modern world history up until the day he died in 1986 at the age of 96. (Ref:  http://en.wikipedia.org/wiki/Molotov_cocktail  )

Now the police have to weigh their response to the ever changing and very dynamic phases of any demonstration.  Is it simply a response requiring a measure of crowd control to maneuver the demonstrators on both sides toward certain streets or areas of least effect to the public?  Should the response be more a forceful physical presence to deter potential violent elements in the crowd?  Should the response be to disperse the crowd to avoid impending violence toward public and private property?  Or should the response be a full dispersing of all crowds to quell violent protests, full blown rioting and the destruction of property and threat to personal safety, using smoke, chemicals, and/or safe projectiles?  It’s very easy to understand that any police department confronted with such demonstrations can pass through those phases within a matter of minutes or hours.  The police themselves could be reacting to a situation from just minutes before rather than what might be happening at the moment.  Lines get blurred, crowd dynamics change, on-scene authority changes from moment to moment.  Riots take on a life of their own.  It isn’t a giant leap to understand the desire of police departments to want armored vehicles and heavier firepower to be able to try and retain control of what can be uncontrollable civil unrest (or attacks from zombies after the apocalypse; uh huh.).

But perhaps the one event that rather galvanized police department thinking toward heightened armor and firepower for its officers was that event back in North Hollywood in 1997.  Two bank robbers, wearing body armor and carrying automatic weapons held off under-equipped patrol officers for 44 minutes.  Here is what Wiki says… 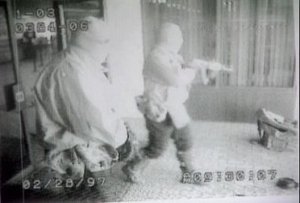 “Local patrol officers at the time were typically armed with their standard issue 9 mm or .38 Special pistols, with some having a 12-gauge shotgun available in their cars. Phillips and Mătăsăreanu carried illegally modified fully automatic Norinco Type 56 S-1s, a Bushmaster XM15 Dissipator, and a HK-91 rifle with high capacity drum magazines and ammunition capable of penetrating vehicles and police Kevlar vests. The bank robbers wore body armor which successfully deflected bullets and shotgun pellets fired by the responding patrolmen. SWAT eventually arrived bearing sufficient firepower, and they commandeered an armored truck to evacuate the wounded. Several officers also appropriated AR-15 rifles from a nearby firearms dealer. The incident sparked debate on the need for patrol officers to upgrade their capabilities in similar situations in the future.”

After this nightmare event for the L.A. police things started to change regarding bringing the street cop up to matching the armament and body armor protection available to perpetrators.

Couple this event with the “war on drugs” mindset passed down to local police from the Federal level, with possible gang and cartel confrontations, it all has likely fed the desire for surplus military equipment and the shift toward municipality-run paramilitary rapid response forces.. the evolution of what was traditional SWAT.  While one might accept a certain amount of this in large urban areas a variety of military gear is finding its way into more rural county and small town America police departments; places not likely to find their communities in the middle of civil riots, open cartel drug wars, or gang turf battles.

Some of this equipment is really beyond the scope of what most (if not all) police departments might need.  The Pentagon has given out tanks (with cannons), land mine-resistant armored vehicles, grenade launchers, land mine detectors, and machine guns.  Now, Pentagon-released personal tactical gear seems more palatable; night vision equipment, pistol belts, camo gear, holsters, Kevlar helmets, etc., those things seem to make a level of sense.   Bottom line, cops are showing up at demonstrations dressed ready for bear and for many the image itself is intimidating but not in the way crowds used to think… meaning, better break up or this long line of police will break YOU up.  Now the crowds perceive the long line of military-equipped police look more like an oppressing army of Darth Vaders out to circumvent the First Amendment… which then encourages from the demonstrators other passions and emotions into an already volatile mix.

So What Do We Do About “Individual #1”? — A Followup Thought.

The reason I have this blog

Anything can happen between now and then, and WILL happen!November 6, 2020
259 days to go.

The Story Behind My Gravatar

BLOGS TO CHECK OUT

Tired of all the politics? Try my other blog.

VISITOR HITS TO THIS BLOG